Paul Benoit has been playing music in the Seattle area and touring for over twenty years. He’s performed and recorded with numerous songwriters including Chris Chandler, Dan Bern, Reggie Garrett and Laura Love. After studying music and literature at the University of Washington, Paul joined the band Crosseyed, an electric/acoustic roots rock group which released two albums and toured throughout the western U.S. with its popular, high energy shows. 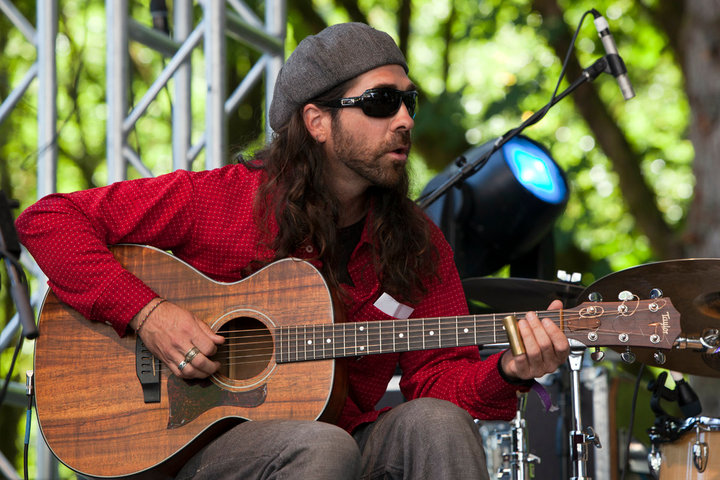 In 1997, Paul co-founded a band called Hanuman, a four-piece, all-acoustic instrumental ensemble. The eclectic nature of this new band, blending jazz, bluegrass, country and rock’n’roll with African beats, prompted Paul to experiment with new musical styles and instruments. He traveled throughout Asia, Europe, Latin America, and India studying instruments such as the sitar and the Indian slide guitar. Hanuman released four albums, sold over 8,000 recordings and toured the U.S., playing at clubs, festivals, and theaters, up to 200 dates a year. In 2001, the band received Best Touring Band and Best Album awards from Sounds of Seattle and was voted Best New Band by the Seattle Weekly. In 2004, various members reformed as The Hanuman Collective and recorded another C

In 2002 Paul recorded his first solo CD, Dopamine, with a small band of musicians sequestered together in a cabin on the Olympic Peninsula. The eleven songs on Dopamine draw on Americana-style traditions such as folk, blues, country and pop. Paul’s songwriting continued to evolve with the lush arrangements of his second CD, Combustible, released in 2005 and named a top-12 DIY CD in Performing Songwriter magazine.

In 2006 Paul composed the soundtrack to the film Diggers, which won the IFP/Seattle Spotlight award and premiered at the 2007 Seattle International Film Festival. Later that year he released Lazy Eye, a collection of 10 acoustic songs with a full band, and in 2008 came an EP entitled All the Miles. Paul recorded his 5th solo CD, Bluebird, at a beach village in El Salvador. Released in 2009, Bluebird charted in the top 25 Euro-Americana charts.

In 2010 Paul released Zibbi Dibbi Doo Zibbi Doo Wah Doo, a joyful collection of kids’ songs for adults too. Ragpickers, a collection of modern blues and pop songs with richly layered arrangements was released in 2012, followed by Have You Seen Me in 2013, pure contemporary Americana. Paul’s soulful guitar playing on this and his 2015 release, My Old Clothes, elevate his work from the crowd of singer-songwriters on the Americana scene. His 10th studio album, King of Delusion, blends psychedelic rock, soul and pop with lush horn melodies, explosive guitar work, and skillful songcraft.

Paul’s 2019 release, Lost Days, Long Nights features songs written on his travels to South America. It’s an exciting blend of Americana and compelling rock songs, inspired by his decades in music, performing and traveling around the globe. Paul continues to perform solo, with his band, and with many other songwriters worldwide.

Beautiful Lies 2021 release is Paul Benoit’s latest collection of moody rockers, Americana ballads, and sweet duets featuring vocals by Amilia K.
Spicer, Michelle McAfee, and Sean Divine. Paul is joined by a stellar
band of musicians with Rebecca Young on bass, Ron Weinstein on Hammond B3 organ and Will Dowd on drums.

Special guests also include Jesse Dalton on acoustic bass and Noah Jeffries on violin and mandolin from the Austin, Texas band The Deer.
The album was recorded at Robert Lang Studio in Seattle and in a cabin
on the Olympic Peninsula and produced by Paul Benoit and Jesse Field. Listen to Beautiful Lies on Spotify or these popular streaming platforms.