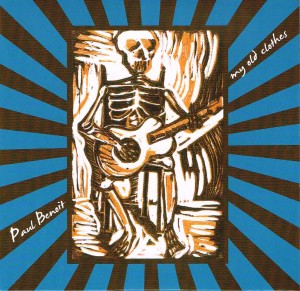 Paul Benoit’s release “My Old Clothes” stands out in the crowded arena of singer-songwriters; his soulful guitar playing makes the album shine. From the even tempoed groove of the album’s opening track, “The Hardest Part” to the contemplative “The Sailor,” Benoit’s discerning lyrical style flows with an honesty that makes the songs sing.

The record is as bare bones as the cover art. It is in the space between the bones that the album breathes and comes to life. In short, while all of the elements that make for a great record are here: from accomplished musicianship to tasteful production values, it is the subtle, meditative songwriting that pushes it above the mountain of singer-songwriters that exist in the new norm of self released records.