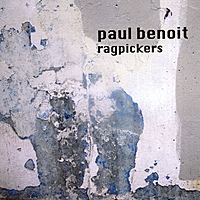 “Though this is not the sort of album to which I am automatically drawn, Ragpickers is so accomplished and listenable that resistance is pointless. A Seattle-based singer-songwriter, Paul Benoit is — broadly speaking — out of the James Taylor school. That’s not to say he sounds particularly like Taylor, only that Taylor pretty much invented a particular kind of post-folk, acoustic-guitar pop music that, besides vague folkishness, incorporates elements of blues, r&b and rock. At least one cut, ‘Kickin’ In,’ owes more to Paul McCartney than to Taylor. I’m neither for nor against McCartney — actually, he and his music rarely enter my thoughts — but I imagine this is a pretty good example of the faux-McCartney style. Well, let’s drop the snark: it’s a good pop song, period. Ragpickers is expertly produced — by Benoit himself — calling on the services of a small band of fine rock-pop players who carry Benoit’s polished vocal and intelligent lyrics. Owing to my own particular aesthetic bent, I am drawn to the relatively more down-home songs such as the not quite earnest spiritual anthem ‘Can’t Stop Me’ and the blues-tinged title piece, which works metaphors on multiple levels of meaning. Nice melodies, too. Benoit definitely has a talent for those. Though James Taylor has always been able to deliver the goods himself, he has left us with a dubious legacy of mediocre singer-songwriters and injected into the culture the unfortunate notion that just about anybody can write a song. Benoit, on the other hand, is a credit to his tribe. Ragpickers shows there’s life in the genre yet.”
Rambles.net — Jerome Clark

“Paul is able to play glorious guitar licks and transmit a pure front porch feeling…knows how to surprise with his music again and again.”
Hooked on Music —Michael Masuch